Every day, more companies, organizations, and individuals are discovering all of the amazing ways that cloud hosting can change their businesses and lives for the better. When we consider the state of information systems only a few years ago, it is easy to be in awe of how far technology has advanced in such a relatively short time.

If You Can Dream It

One of the most incredible aspects of technology is that it is only limited by the imagination. It wasn’t so long ago that people would pull their flip phones out of their pockets with a flourish and a devilish “Beam me up, Scotty.” When iPads came onto the scene, everyone imagined that they were receiving important reconnaissance from star ships in orbit around the planet. Pop culture and media have been shaping the technological landscape for generations, inspiring some of the most innovative creations and even reshaping the way we think about and process information.

The Future is Bright

Cloud hosting is a technology that is impacting the world in a variety of ways. You know that cloud systems make it possible to share and disseminate information in real time and that they provide a safe and secure platform for data storage. But cloud systems aren’t just limited to storage and easy streaming. There are several technologies utilizing cloud system principles in the works that come right out of science fiction.

One of the best advantages of cloud hosting is that it allows for large amount of data–amounts too large for most people to handle–to be crunched and analyzed in a relatively short amount of time. Potential applications for systems that can not only sort but analyze big chunks of data are almost endless. For instance, researchers at Cornell University have utilized cloud systems in part to design computer programs that can deduce natural laws on its own and provide the mathematical equations that represent them. Some of the equations that the program began to formulate are very familiar to physicists–laws like Newton’s Second Law of Motion. 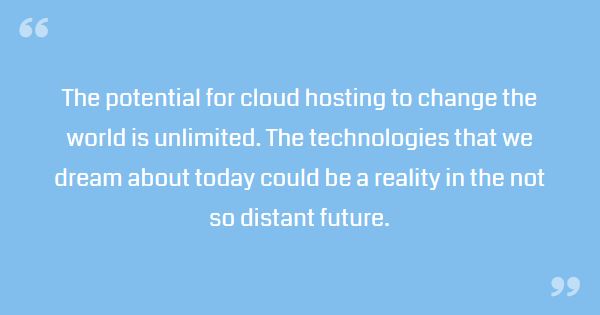 Cloud-based systems will also have beneficial applications in law enforcement. In instances where it is important to track down a wanted individual, cloud-based systems could filter through numerous video surveillance feeds and analyze them in order to locate the perpetrator. The implications of this type of technology are exciting because it would take almost no time at all to track down dangerous individuals and get them off the streets.

One of the roadblocks faced by many international businesses is the language barrier. It is a sad reality that most Americans are still not becoming fluent in important foreign languages. But the issues that arise from language differences may soon be a thing of the past. Universal translators are currently in development and will change the world when they hit the market. These translators would pull language data from the cloud in real-time and would allow speakers of different languages to communicate just as easily as if they spoke the same language.

The potential for cloud hosting to change the world is unlimited. The technologies that we dream about today could be a reality in the not so distant future. Don’t wait to become a part of this legacy. Contact Galalee Software Solutions today and let us help you and your organization on your path towards a bright new future.